We still do not have any new teeth!

I take this to mean we are going to have one hell of a month when the remaining 14 (Weston) and 16 (Corbin) teeth all decide to come through at the same time…like when they’re two. 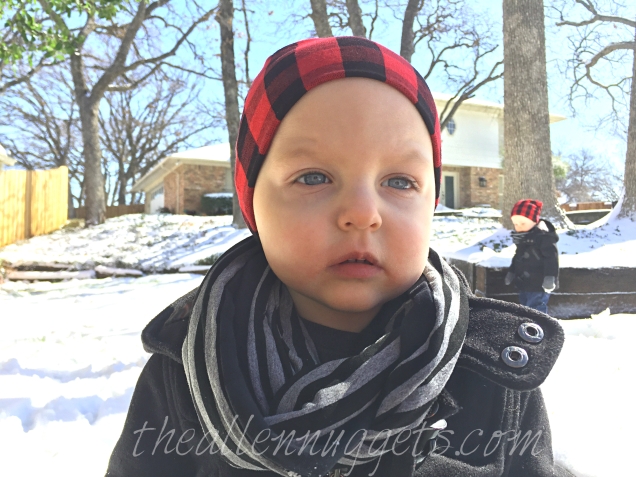 Oh those baby blues.  Which is a rare photo catch because he’s always squinting!

Weston is still pushy and steals every single toy that his brother has.  He will spot Corbin playing with something from across the room and I can see the look in his eyes.  He zones in on what ever is in Corbin’s hands and, no matter the distractions I put in his path, he is laser focused.  He hasn’t gained much weight, still strong at 26 lbs but he seems to be getting taller.   I cannot say for sure because he won’t stay still long enough for me to check his height.  His little chubby cheeks are starting to thin out (just a bit) and I can see more toddler and less baby.  Pause for sobbing.  He still isn’t saying “mama” often but he is very sweet to me.  He loves outside and sticks.  He could play for an hour with a pile of sticks and a bucket.  His facial expressions are awesome.  I catch a glimpse of the teenage years to come.

Corbin is slowly starting to “stand up for himself”.  90% of the time he just relinquishes whatever toy Weston wants but on occasion he holds on tight and/or tries to run away.  Once last week, he actually bit Weston on the arm, out of frustration.  I knew it would happen eventually but it hasn’t swayed Weston from toy-stealing one bit. Corbin is weighing at 24.6 and is also getting longer every day.  He is still a big time daddy’s boy.  If he can hear Daddy in the hallway or The Hubs leaves the room, Corbin is out searching for him and saying “Da-da, Da-da”.  He is also very attached to his blanket (the love is getting stronger ) and likes to snuggle now, as long as the blanket is involved.  I’ll take it.  Even if he calls me “Da-da” most of the time.

They have both become generous with kisses and I love it.  The best is when they give each other a smooch.  SO STINK’N CUTE. 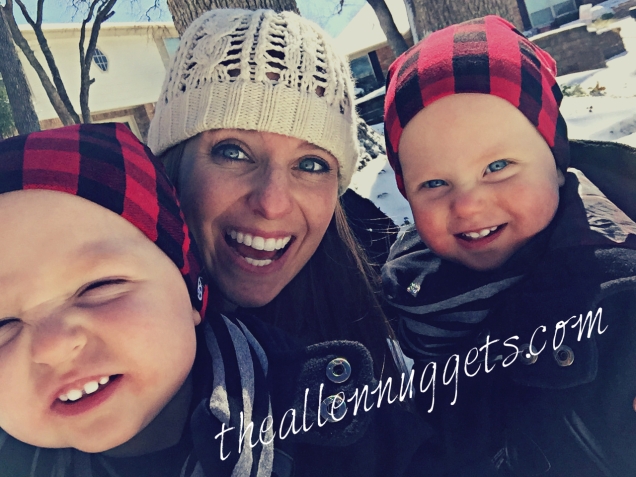 They’re really challenging me on their meals at this point.  One day they’ll eat one thing and the next, completely refuse it.  I know it’s all normal but I’m trying to encourage variety and it’s proving a challenge since they don’t like pasta or potatoes.  I look on Google and Pinterest to get ideas and I find that I’m already offering them similar meals to most moms out there.  That means I’m doing something right. Right?

Breakfast – Egg and cheese omelets, LIFE cereal, mandarins (West), pears (Corbin).  Weston eats scrambled eggs all the time but wanted nothing to do with his omelet.

Lunch – Oscar Meyer Selects Turkey Hot Dogs, edamame (which was sampled about 10 times annnnnd spit out all 10 times, by both boys), banana.

Dinner – Chicken Divan (recipe) which they ate about 1/2 and then Weston refused and started spitting it out.  What?  Why, after 10 bites, is it now terrible?  It’s totally not terrible.  I love it.

Dinner– meatballs, star pasta w/tomato sauce.  Star pasta is the only kind of pasta they’ll eat because it is tiny.  I don’t know how you can even tell it’s pasta. Of course they don’t sell this kind in whole wheat.  Grrr.

I battle with providing substitutes when they don’t like something and also striving to offer variety.  It would also be great if I had time to make everyone dinner and we could all eat the same thing.  Alas, not possible when I don’t even arrive home from work until 5:30 and The Hubs even later.  #thisisnottheWaltons

Oh well.  I’m doing the best I can.  If you’ve got any suggestions for toddler meals that don’t include pasta or potatoes, shoot them my way!