When The Hubs and I first got married, and lived together, there was a lot to work through.  Anyone who says the “honeymoon stage” lasts for the first few years of a relationship, is misrepresenting marriage in my book.

There were a lot of demands and concessions.  We both lived on our own (or with roommates) for years and then came together and shared everything, it was different.  At least if you didn’t like your roommate before, you could move out.  Not so much this time.  For better or worse.

I’d say it took us the first full year of living together to really get to a point where we didn’t argue about little things.  We worked through all of it and now we’re stronger than before.  I also compromise a lot more than I did previously.

Now as parents, we are working through a new dynamic in our relationship.

I think it’s harder for me because I always expect The Hubs to think the way I think.  And as we all know, “men are from Mars and women are from Venus”.  So that isn’t fair of me.

Why wouldn’t he want to spend every waking moment with The Nuggets?  I do.  Why doesn’t he feel guilty when he works late and arrives home after the boys are in bed?  I do.

I couldn’t understand him.  It frustrated me and made me resentful.

The Hubs is a great dad.  Fantastic.  He’s patient (most of the time), he loves them dearly and you can see The Nuggets are his pride a joy. 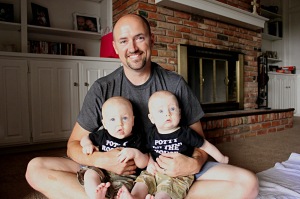 It wasn’t until The Hubs made a comment that, for some reason, put it in perspective for me.  Something just clicked.  Now I get it.  There is a big difference in Mom and Dad, and the roles that we play.  This is also why I would think it would be terrible hard to be a single parent.  I need to stop thinking that The Hubs should feel and think the way I do.