The world knows having a kid costs money.  A nursery, supplies, toys, diapers, formula (if needed) and more.  So having two kids, at once, is double expensive right?

This is my take on the real costs of having twins. 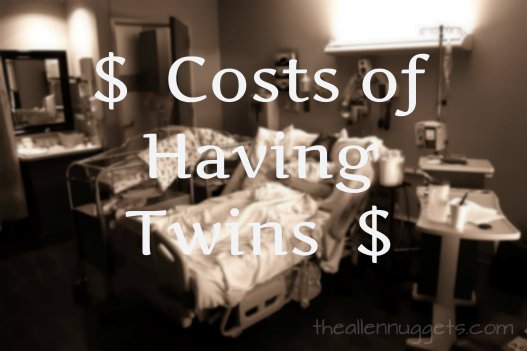 1. Hospital costs.  Twins, not all but a large percentage, are born prematurely.  Depending on how early and their health at birth, they can be in the NICU for anywhere from a few days to many weeks.  The cost of having a baby, in a hospital, falls under the mother’s insurance and deductible as “one patient”.  If the babies are moved into the NICU, they become their own individual patients.  So you have the expenses of mom’s stay in the hospital and each baby’s stay.  Weston was in the NICU for 12 days and Corbin for 14 days.  Once the boys became individual patients, we also had to meet the family deductible instead of the individual.  This amounted to a little over $8,000, out of pocket. Not something we took into consideration when we budgeted for doctor’s bills.

2.   Nursery.  This is an obvious one.  Two cribs. Two mattresses. Double the blankets. Double the clothes.  Obviously you don’t have to have two sets of everything but you will need more than what a single baby would require.  Resale shops are a really really great idea.  As you’ve probably noticed, I love my boys to match or coordinate.  That doesn’t count out resale.  Buy shorts, jeans, and shoes gently used and then purchase the tops new and matching.  If that’s your thing.  I cannot get enough of it and I know they’re little personalities will come out eventually and they will want to dress themselves.  Until then, I own the wardrobe.

3. Car seats and strollers.  I didn’t mess around with car seats.  I wanted something with a high safety rating but it also needed to fit a small baby.  Yes, there is a difference.  We used the Chico Key Fit 30 ($189.00 x 2) about $380.  Super high safety clearance and was rated for an infant as small as 5 lbs.  Necessary to bring the Nuggets home.  If you didn’t know, the hospital performs a test to ensure that the baby can sit in a car seat for 90 minutes without any breathing issues.  They must pass this test before they are released.  Strollers are obviously a bit more expense because you need the double.  We’ve spent a stupid amount of money on strollers but you can probably avoid our mistakes.  And avoid American Airlines.

3. Diapers and formula.  Double. Duh.  In the early days, we went through a box of diapers every 5 days, which would amount to approximately $45 a week.  Formula, in the beginning would be harder for me to estimate because I was desperately trying to breastfeed/pump and then supplement. Around three months I dried up totally and they were on formula 100%. At that point, we used approximately three-four containers a week (Enfamil Sensitive) and that was about $90-$100.  Some friends enlightened us to try Target brand and the boys actually seemed to like it better.  Since it was a few dollar cheaper and was a bigger container, that reduced  $75.  Monthly cost of diapers = $180, formula = $300.

4. Toys.  Do you have to have two of everything?  Nope.  Does it make it easier and more convenient? Yep. Especially as they get older.  Certain toys they just like better.  And they both want it.  At the same time.  I did a post on twin must haves here.

5. Child care.  If you are so lucky to be able to stay home please enjoy every second of it.  At first it’s tough and you want to have adult interaction desperately but then they stop needing you every second of every day and it’s easier.  And then, all of a sudden, you want them to want you every second of every day.  We have a nanny that comes to the house and it’s actually less expensive than putting both boys in daycare.  Full time daycare will run you about $205-$300 per child, a week.  Monthly cost of about $2000.

Twins are no doubt more expensive than having one child but if you have two children (even at different times) costs are similar.  But it’s so worth it.