After reviewing some of my old posts, I realized I said I would do a post on my Baby Jogger City Mini.

We bought our Cadillac of strollers right before our trip to WI.  If you want to take it through the airport, make sure you are not flying American.
Anyways, this thing ROCKS.  It costs an arm and a leg (think around $599) but, I think, The Hubs got suckered.  We purchased it at Buy Buy Baby. We could have gotten “last season’s” model for about $100 less but The Hubs haaaad to have the one we could see and touched in the store.  Usually, I can talk him out of this kind of rash decision, and order the less expensive option online, but we were in a crunch for time.  We needed it for the airport.  Sometime after we sold our soul to Buy Buy Baby, I found out that American wouldn’t allow it past the ticket counter.  Gah!
I am waaay off subject.
This stroller is awesome.

It can be steered with one hand.  Hell, one finger if needed.

It isn’t advertised as a jogging stroller but it totally can be.  I lock the front wheels and run with it.  Granted, I’m not a long distance runner so it works just fine for us.  I won’t add that I haven’t run more than, cough*three times*cough, in the last several months.  I plan to.  I neeeeeed to.
It is great at “off road-ing”, with the all terrain wheels (that cannot go flat).  The sun shades have three levels of coverage, which can keep them completely out of the sun. Even when you are walking directly into the sun.  They also have little peek through window to see the babies.
The seats recline to almost completely flat.  Great for nap.  I will admit the actual process of lifting it back into a sitting position is kind of cumbersome and definitely requires two hands and a bit of wrestling.
The five point harness is totally necessary but also makes the stroller an option for pretty small babies.  I wouldn’t put a newborn in it, but with support, a 15 lb. nugget could totally ride in this Caddy.
I did NOT take spending that kind of money on a stroller lightly.  I Instagram stalked twin mommies and they all recommended this stroller.  I creeped out moms on the March of Dimes walk in April while staring at their strollers like a weirdo and finally asked what they thought about it.  A resounding, “fantastic!” is what I got.  Real mom’s recommendations are what sold me.
Would I do it again and pay full price for the newest model?  No.  I would go with “last season’s” or order it from a discount site for sure.  Would I also punch the person that works at American Airlines that says no to strollers over 30lbs?  Yes. Yes, I would.
Today is The Nuggets doctor’s appointment, so tomorrow I should have an update on their stats.  Saturday are our family pictures and the boys 1 year pictures (two weeks early) and I’m very excited! 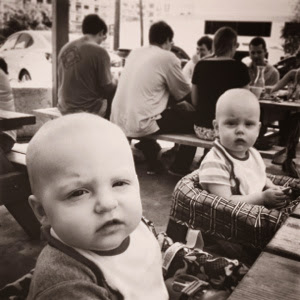