As you can see, no matter how many silly sounds or faces I made, these boys are serious.  Well Weston looks a little on the confused side here..The Hubs laughs every time he sees this picture.

Since we no longer have the luxury of going to the doctor’s office monthly and we are lucky enough to have avoided illnesses, I have no idea how much these two weigh.  Heavier for sure.  Bigger for sure.

Seriously though, they are so big.  This mommy is sad.  OBVIOUSLY everyone and their mother (pun intended) has told me, “enjoy it”, “it doesn’t last”, “they grow so fast”..I’m actually tired of hearing it.  DUH people.  I know.

I totally look at their little tiny booties’ in the mirror before bath time because I know it’ll never be that tiny ever again.  Ever.

Next month we actually have a doctor’s check up and we’ll find out but in the mean time our milestones:

Corbin looooooooves solid food.  Sometimes it’s hard to get him to eat his bottles but he never hesitates to eat solids.  I take that back.  If there is a green veggie and it doesn’t have apples in it, he won’t eat it.  He will fuss at you because he wants food but he isn’t a fan of green veggies.

Weston eats anything.  Everything.

Corbin seems to be a little further along in regards to chunky solids.  He actually chews his food.  Weston still kind of tongue thrusts anything that is semi-purred.  They both love those little cereals and they chow down on a Mumu.  I think if we had taken the baby led feeding idea that I thought about trying, my guys would still be on bottle only.  They pick the food up but cannot figure out how to get it to their mouths and instead, throw it on the floor.  With the exception of their new talent, eating Mumus.

Weston is crazy expert at crawling already and Corbin is army crawling all over the place and is trying quite diligently at getting up on those hands and knees.  I’m very sure I’ll have one early walker.  Wes pulls himself up on everything.  If he doesn’t figure out how to start stepping away from it soon, I’d be surprise.  Pleased, but surprised. 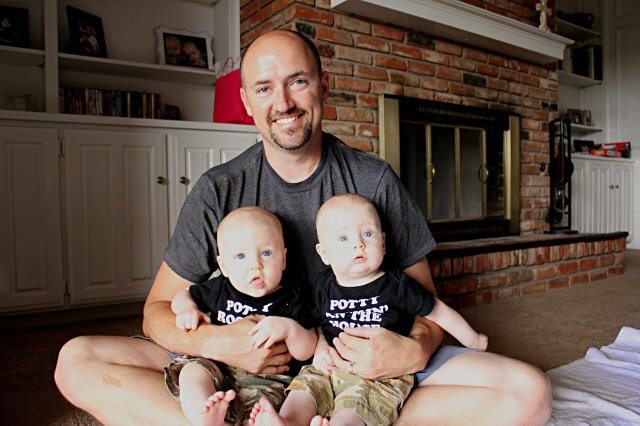 The Hubs first Father’s day was a success.  Nothing fancy but some nice recognition and a day of pool side fun, grilling and family and I’d call it a success. The only thing missing from this pictures is The Hubs camo cargo shorts.  🙂

The Momo and Poppie (my rents) were there to celebrate as well.   Look at those double chins!  (I’m talking about the babies people).

In other news, my new job is going well.  It’s definitely a transition and different but I feel rejuvenated being somewhere new and fresh.  I’ve received some good feedback in just a week so hopefully my new employer is happy as well.