My Jackson died on Friday.

I didn’t really have pets growing up. I got Jackson when I was moving into a one bedroom apartment. It was the first time I would be living on my own with no roommates. I needed someone to talk to.
Jackson was a tiny little thing. I loved him. He got on my last nerve sometimes when he would bark at nothing or pee in the house because he was acting out.
He used to get out of the backyard and go exploring in our neighbors’ yards and then come to the front door to be let in. On Friday he didn’t come home.
We live near a pretty major road now and for whatever reason he attempted to cross it (think six lanes of traffic).
A nice lady called me (my # is on Jackson’s collar) and gave me the worst news possible. She stopped, after the person that hit him didn’t, and moved him out of the road and called the number on his tags so his owner would know where he was. The Hubs buried him in the backyard.
We miss him a lot. I feel bad because he was definitely in the back burner lately with how busy the boys keep us but he still loved me unconditionally. I’ll never have another dog like him and I’m so bummed The Nuggets didn’t get to know and love him. 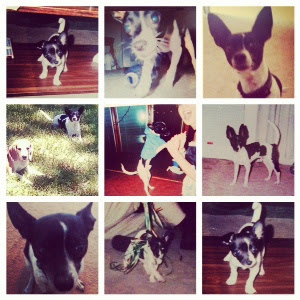