I’m a little behind here.. 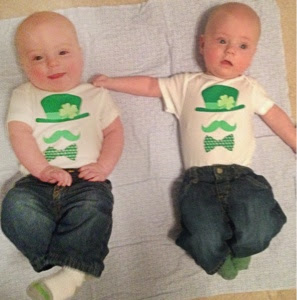 Oh yeah and Corbin is officially a roller! 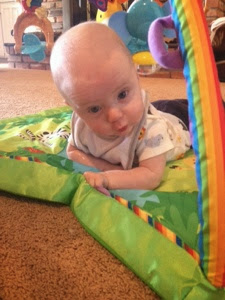 He makes the funniest faces 🙂 He has had the ability to roll over but wasn’t a fan for about a month. Now Cor’s taken to rolling over a bit more. He’s not quite as strong as Weston (who has been rolling for almost a month now) but he’s making an effort. He even took two naps on his belly yesterday!
Weston slept pretty much all night last night -woke at 10pm to eat and Corbin was up once around 2:30. Both woke around 6:30.  Making progress.
I found a link yesterday on Pinterest of a momma that followed the “child led eating” philosophy. Her daughter, who is only 6 months old, eats everything. Not puréed fruit and veggies either. Omletes. Corn on the cob. Chicken off the bone (or remnince) I was flabbergasted. Is that really an option???
Www.simplebites.com/how-I-discovered-and-embraced-baby-led-weaningfeeding-bwl/
This led to more googling…
And another mommy…
Www.ahealthysliceoflife.com/2012/03/27/our-adventure-with-baby-led-weaning/
Crazy! What a concept! My aunt mentioned that she did this with her third kiddo and that my cousin didn’t really show much interest in food until about 9 months. (Note: my cousin is 13 so this idea has been around for a while.) I know babies get their nutrients from formula/BM and that food is for practice for pretty much the first year, so why not let them practice with real foods?
I might be down for this practice if I was the one feeding them all of the time. Unfortunately, I cannot since I work and I would be ultra paraniod having the nanny be responsible.
But that doesn’t mean we can’t do both, right? Puréed and whole foods on occasion?
The boys are still not 6 months yet or sitting up unassisted and although they are starting to intently watch us eat, they haven’t actually tried to grab any foods from us. So we’re quite there yet.
I tell you what, since becoming a parent I’ve had a LOT of eye opening revelations and I know everyone has their opinion on how to do things but these are my Nuggets and we just might try it out!
Xoxo – Lindsey