I miss having a doctor’s appointment for every month. Granted, now they get shots and I don’t like that but I want to see how much more they’ve grown.

I took their 5 month pictures on Sunday (9th) but I need to load and edit them. 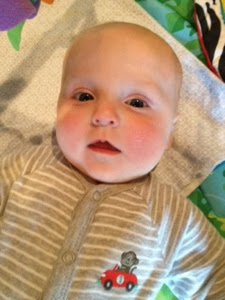 Weston is rolling like crazy. He never stays on the play mat anymore. This morning, before I left for work, he was all over the place. After our nanny arrived, I passed through the living room on several occasions getting ready to go and each time he was somewhere else, taking in the new view. It’s weird since for so long he was exactly where you put him. He doesn’t really roll with a destination in mind but he’s definitely going somewhere. You cannot contain this kid.
He also giggles now. I heard his first belly laugh on Saturday and I was in loooove! 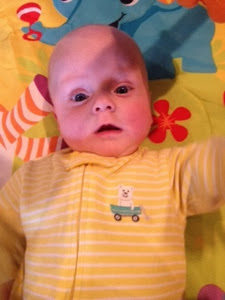 Corbin, not so much of a roller. He still doesn’t care to be on his stomach. He can rollover but chooses not to. Ever.  He arches his back though so he can watch Weston all over the room. He is very smilie (except at cameras) and starting to snuggle when he is tired.
Both boys are big time talkers. Corbin will carry on an entire conversation with you if he’s in the mood. Weston will talk. To no one in particular. All the time.
Both are also starting to recognize when I leave the room and aren’t usually too pleased about it.
Sleep has become an interesting topic in our house. I was having a difficult time identifying a good bed time without them becoming overtired. It seems to be about 6-6:30. This earlier bed time solved the “waking up screaming bloody murder 1-2 hours after falling asleep”. After talking to a sleep consultant, she identified that problem.
With such an early bedtime though, they wake to eat in the middle of the night. The sleep consultant recommended not to wake the other twin to feed so their natural sleep patterns can emerge. She promised they’d line back up.
So, two wakings (1 per babe) every night. I will say, the first night we implemented the new bed time they were so tired they slept 13 hours straight. Poor Nuggets. Now we just wait for that magical day where they sleep all night. Consistently.
They do love each other already! 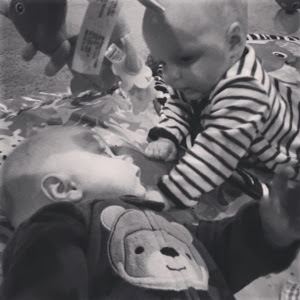 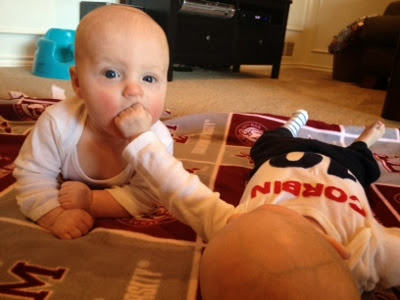