I am also frustrated and terribly behind on my blogging!

I’ll do what every other blogger does and set a resolution to blog more. But my other resolution is to “unplug” more and live in the present so they really seem to cross each other out. I love blogging to keep family and friends informed and as a nice outlet to whine sometimes but most of all, as a record of my life and those in it because it seems to be moving faster and faster each year.
The holidays in the Allen casa were low key this year. We let everyone know months in advance (like as soon as we knew my due date) that we wouldn’t be traveling to anyone’s house (near or far) for the holidays.
Luckily, everyone understood. Unluckily, my entire side of the family, sans my Pop, got sick. So we had a very quiet Christmas Day. My mother in law and one of my sister in laws came by the following Saturday but that was about it.
I am on the fence on whether or not I am disappointed. I mean it was the Nuggets first Christmas but the fact that they’re three months old (tomorrow!) and haven’t caught any illnesses makes me very happy. Lots of people = lots of germs. I did miss everyone though. 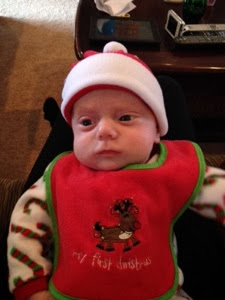 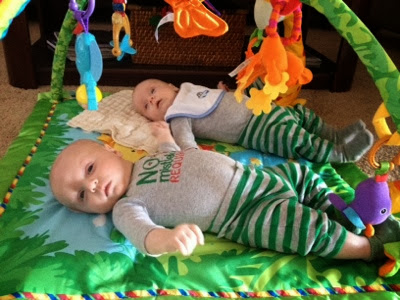 The Nuggets’ Christmas present. This little jungle mat is awesome!
Now my frustration comes from my lack of sleep. Still. I thought we were making progress. The boys had started sleeping from 10pm until 4 am but last night, both were up at 2:30. Wouldn’t have been much of a problem except West was up again at 5:30 screaming his head off. I know he didn’t need to eat yet, so I held him while he yelled his disatisfaction at me.
I have worked to follow the Babywise (started late though) program but according to them my boys should be sleeping 8 hours by now. Actually, if we didn’t adjust for prematurity, it would be 10-12 hours by now. I need them to sleep 8 hours…don’t they know I have to go back to work in less than two weeks?!? Of course they don’t.
Let me back up and say I am not frustrated with my children. They are just figuring this whole living thing out. I’m frustrated with my expectations and my lack of 8 solid hours of sleep.
I recently read that when you let go of expectations, life is much easier. I definitely had expectations that we would be a little further along and since we aren’t, I’m frustrated and disappointed. I wouldn’t feel this way if I wasn’t expecting different results. Our sleep, or lack of, would be what it is with the Nugs. If I never expected the Babywise sleep timeline I wouldn’t be frustrated or disappointed.
Of course the Babywise books says most babies have _____ results. Not all babies. Not my babies.
To enter into this 2014 with such a downer of a post is redic. I have so much to be happy for and even more to look forward to. I think I have too many emotions today because the returning to work deadline is looming. That is a whole other post inandofitself.
On January 1, 2013 I posted on FB, “This is the year, I can feel it”. It was most definitely THE year. So much happened and so much changed. After longing for a baby, I was blessed with two. If they don’t sleep well for the rest of my life, I will still be grateful they are mine and I will love every minute, of every day with them. I’ll just prefer the minutes in the day time. 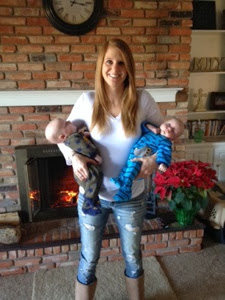