The boys are eight weeks today. This mommy is starting to lose it a little bit.

As I’ve mentioned before, premature babies are delayed in milestones however many weeks they were early. Which is important now because of their lack of sleep. And my lack of sleep. Probably most effected in this category is The Hubs. He is currently operating on approximately 4-6 hours of sleep daily. I don’t know how he’s doing it and I’m incredibly nervous about returning to work if they boys aren’t sleeping better within the next month. We are co-sleeping currently. No where in my plans did I intend for this to happen. But when they sleep maybe 20 minute increments in the bassinet or 2-3 hour intervals in our arms, guess which won the battle. I don’t want this to continue though.
In my usual style, I’ve been scavaging the web for information. I’ve read Healthy Sleep Habits, Healthy Child also. Across the board, the info says you cannot “spoil” a baby 3-4 months old.  You also cannot start sleep training/conditioning, if you so chose, before 2 months (from their due date).
So, for us that means 3 months and another 4 weeks of craptastic sleep.
It’s not just the lack of sleep at night either that is making me looney.  It’s the fact that during the day I cannot put the Nuggets down. Not for more than a few minutes – like two. They won’t sleep in their cribs, swings, or bouncy chairs. Sleep only occurs on Mommy’s chest.  This wouldn’t be too much of a problem with a singleton but with both of them….leaves me banished to the couch. Not moving.
The only way to go to the bathroom/eat/or make bottles is to just listen to them cry and scream at me. This also contributes to crazy town.
I love my babies more than life itself but the lack of sleep and any time not sitting on the couch is getting to me. I blog from my cell phone currently with both Nuggets drapped across me. I do practically everything from my cell actually.
I have made it outside twice this week. Both babies yelling at me when I put them in their carriers but I couldn’t take the couch any longer. Plus, I need some exercise and fresh air. Eventually they settled and I enjoyed a glorious 45 minutes outside. But tonight the cold front comes in and we’ll be stuck indoors.
I know this won’t last forever and I’m not wishing any time away but the sooner they sleep better would be great! 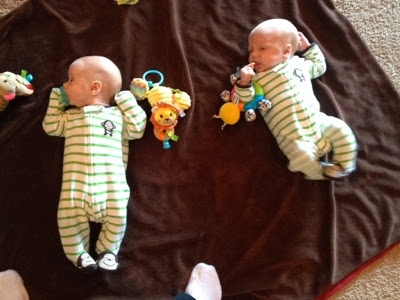