So I debated sharing all my challenges on this subject. But then I realized that out of all the research I did, no one told me these things. But then after people started asking me how it was going and I’d share my struggles, people started coming out of the woodwork that faced the same/similar issues or challenges, no research listed.

So here it is, out on the big World Wide Web and hopefully others will be educated or at least given the heads up of the challenges I knew nothing about.

1. Lactation consultants share the same education/certifications but their “coaching” varies drastically. You can hear one thing from your LC and a friend will tell you their LC said the opposite. Or if you go to more than one LC, you can get conflicting info. I was told their is no such thing as nipple confusion. I can tell you first hand there is too (I also believe this is only an issue in the very beginning. Once your little guy or girl has a strong basis for nursing, I don’t think it’s a problem to introduce a pacifier or bottle). Weston stopped latching because he preferred the bottle – he wouldn’t open his mouth any wider than necessary for the bottle. I still hope to correct this.
2. Pumping will not always result in a bottles worth of milk. It is actually normal to only pump an ounce or two. With the boys in the NICU I was provided a pump immediately (thank you Baylor Med Center) and began an intense regim of pumping every three hours, around the clock. Initially, I got only minuscule drops of colostrum, which is normal. Do not disregard the 1-3 ml of this liquid gold. Keep anything you can get! Anyways, I was initially told because I was only plumping 1/2-1 ounce that I had an insufficient supply. Later (after a lot of tears) I was educated that the pump is not a good indicator of your true supply. Babies are much more efficient at getting the milk. And some people never even let down for the pump- like me. Don’t let pumping output discourage you from nursing.
3. Breastfed babies are not always fat and plump. As long as your little one is gaining weight, is not dehydrated or lethargic, then you’re feeding them enough.
4. Breastfeeding is not all or nothing. I pumped every three hours, or more, 24/7 and I still couldn’t produce enough for both boys. They would never have left the NICU if we didn’t supplement. Now that they’re home I attempted to exclusively breastfeed for about 24 hours and the boys were starving and fussy. Everyone was miserable.  I think the part that frustrates me the most is all of the info out there that makes you into a horrible mother if you even think about offering your baby formula. I understand that in the 50’s formula was introduced as better than breast milk and therefore there had to be a campaign re-educating everyone but the problem lies with the way the information is presented. Formula fed babies get sick more often, they’re not as smart…come on! I will probably make plenty if mistakes as a parent but to start off blaming myself for every ear infection or bad grade for the rest of their lives is unfair (I already have enough guilt).
5. There are a lot of milk increasing herbal supplements, not just the tea. I would recommend hitting up your local whole foods/central market/trader joes establishment (any natural food store). Additionally, Amazon sells a lot of these product and delivers it to your doorstep!. I used a lot of them and I’m not sure if it was the supplements or the boys being released from the NICU that helped my pumping supply but it doesn’t hurt.
Currently neither of the boys are great at nursing. I was given a nipple sheild because I was told their mouths were too small. Also remember my boys were put into the NICU because their eating skills weren’t coordinated. I hate the shields now. Occasionally I get lucky and they’ll latch on without but it’s few and far between. The shield is an issue because (I think) they associate the plastic with a bottle which usually gives them milk immediately and at a fast flow. With the shield they have to suck for a few seconds before they get anything. Enter hungry babies and they get pissed. Pissed, hungry babies don’t want to wait for the milk to come through the shield. So then you offer a bottle which negatively effects my milk supply.
I was almost exclusively breastfeeding Corbin, and at our one month ped appointment he was 2lbs lighter than Weston. He was still gaining but because he is still so little (5.12lbs) the doc recommended supplementing if he exhibits hungry cues after nursing. Which effects my supply. Again.
The American Association for Pediatrics says the #1 reason women quit breeastfeeding is because they don’t know how much their baby is getting. I think I could do it if I had a singleton but with twins it’s been hard.
As I mentioned above, it’s not all or nothing. I’ll keep doing what I can, for as long as I can, to offer the Nuggets whatever breast milk I’ve got. It took me 5 weeks to come to terms with this. I cried. Every. Single. Day. I only hope sharing my struggles can enlighten others or let mommies with similar challenges know that they’re not alone.
Xoxo 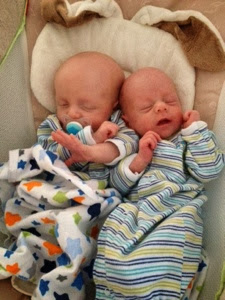 One thought on “Breastfeeding Challenges”