Is it just me or does it feel like I’ve been pregnant forever?

If I were to go to full term, I’d still have almost TWO whole months left.  OMG.

I don’t know how this watermelon could get any bigger! 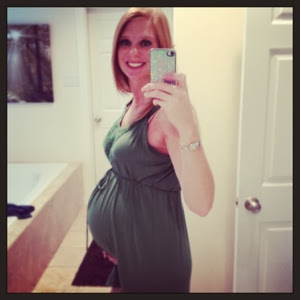 Since it is quite difficult to bend over these days, Jackson has settled for either sitting on my feet or rolling over so I can rub his belly with my foot.  Nice huh?  Ignore my ugly feet, Jackson does. 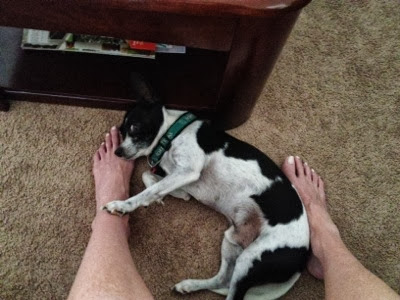 This weekend involved lots of relaxing on the couch.  If you aren’t from Texas then let me tell you, the weather has been phenomenal this weekend.  We had lows in the 60’s and highs in the low 80’s and it’s been gorgeous.  Since I’m stuck on bed rest, we have all the windows and sliding doors opened up so I could enjoy it as much as possible.
I love football.  Like, love it. My weekend consisted of a lot of football watching.  Saturday my alumni, UNT, play a pretty solid game against #9 Georgia.  We lost pretty badly in the end but the showing was impressive.  That evening, I watched A&M (The Hubs alum) kick some major booty against SMU (snooty private college in the Dallas area).  Sunday was a repeat, except sub NFL games.  I squeezed my bump into a Cowboys jersey and we won!  It was an butt whoop’n too! 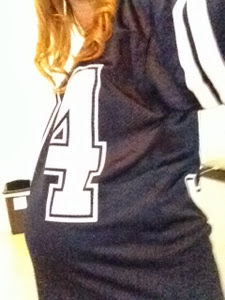 This week we’ll get to measure the Nuggets again and see how much bigger they have gotten.  I’m guessing another pound or so each, which would bring us somewhere around 4 1/2 to 5 lbs.  I also have a feeling I’m going to get questions this week about geting a C-section scheduled on the books.
XOXO