If I haven’t introduced him, this is Jackson. 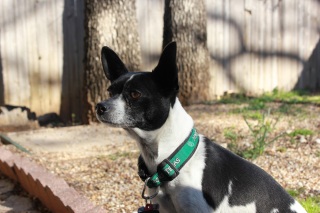 The first time I ever lived alone, Jackson was my buddy.  I went from living at home with my parents to living in the dorms, to an apartment with two friends and from there on, I always had a roommate.  Until… I didn’t anymore.  I remember signing my one bedroom lease and I was a bit scared.  I like to talk.  I like company.  I like to take care of others.  None of those things can be done, in an apartment by onself.  Enter Jackson.

He was the tiniest little puppy and I loved him so.

Growing up we didn’t have pets.  My parents weren’t into having a dog when we had a postage- stamp-sized yard in the burbs.  This was my first real pet.  I’d now have someone to talk to and take care of every day.  He’s a chihuahua.  He’s a well behaved taco-bueno-dog though.  He does not get carried around in my purse or anything.  He sleeps in a dog bed.  I mean, he’s a dog.

Since the hospital stays and the bed rest I feel like my poor dog is being ignored.  I don’t want a smelly dog in my bed (bathed or not) and since that is where I am spending all of my time these days…..

When we’re at work, he’s in his kennel and no one is around but I feel like lately, he’s been extra ignored.  When the babies come he’s going to get even less than the minuscule attention he’s getting now…

My parents have offered to keep him.  Jackson loves them and they love him.  I know plenty of families with furry babies have had to acclimate their dog/cat to the baby but we’ve got two babies coming.  Both, The Hubs and I will have our hands full.

At first I thought sending him to my parents house would be a good idea.  Then I thought it would be hard for him to come back and there be two new additions in the house.  Am I being selfish because he’s my puppy and I’ll miss him?  Will I even have time to miss him?  The other dilemma is, he has a barking problem.  I mean, if anyone walks in front of the house, he’s a barking tornado.  There is no calming him down and eventually you have to throw him out.  God forbid someone actually ring the doorbell!

What should I do? What’s in the best interest of Jackson?

In other news today is The Hubs birthday!!!!  I feel lame because I cannot do anything for him?  No cake. No dinner. Nothing.  We were joking about him picking out his own birthday card 😦  I could go on and on about how awesome The Hubs has been through my entire pregnancy and espcially the bed rest but I’ve done that a few times already.  I love him sooo much, I hope he has a great birthday.  His little boys birthday won’t be too far behind!

One thought on “Am I Being Selfish?”