As most of you area aware, the Allen’s called San Antonio home for about 6 years.  It was a great 6 years and a lot happened in that time frame.

We moved away from all of our friends and started our relationship in the same city (for the first time).

We got married (twice actually).

We bought a house.  Had lots of fun, projects and excitement in said house.

When we left it was sooooo bitter sweet.  I had a better opportunity with work in Houston and shortly after Josh obtained a new job too.  Although his job didn’t work out in the end, they are the reason we ended up back in the DFW area and we are grateful.

I was in San Antonio for a business trip and forgot how much I love that city.  And some of the friends we left behind.

Our old neighbors were the greatest.  Super long story and a coincidence later, we became friends with a couple that lived right down the block.  They are those kind of peeps you meet and just know, they’ll be our life long buds.

In the time we’ve been gone, they’ve gotten married and had a little nugget of their own.  Meet Mr. Rylan! 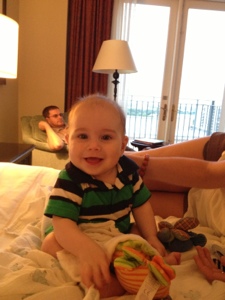 He’s a super observant, friendly, drool-y and all around happy baby (or was that day)!  I couldn’t get enough of him.  I missed him and our friends as soon as they left. 😦

This weekend was pretty productive.  We are making major progress on the nursery.  Here is a little sneak pic. 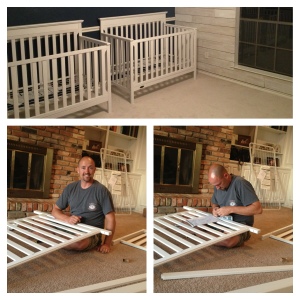 Painting -check. Cribs assembled – check.  I’m holding myself back from buying anything else right now (even crib mattresses) until after the showers because I’m hoping my awesome friends and fam will get us all the stuff we need.  Pretty exciting stuff though.  Every time I walk past the nursery I get excited because we are getting that much closer.
We have one (first) name picked out pretty solid-ly — meaning we both agree on it.  But we’ve I’ve decided that I’d like to meet them first prior to officially naming them so we won’t be sharing the names until they get here.  The other names and middle names are all up in the air still.
Pregnancy stats:
We start our child education classes tonight!  I’m really hoping we get a lot out of them.
XOXO