More like skipped a beat altogether, but fluttering was happening! Ultra sound number two went great!  I’ve been released to my OB-GYN so I can progress to a normal, happy pregnancy!  :o) 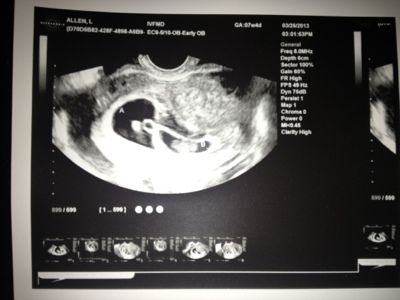 It’s official.  The Allen’s have twins on the way.  We got to see the Nuggets and even got to see/hear the heartbeats, which I was not expecting, so my giddy-ness hit new heights.  Let me add, as the doctor walked in, I was wiping away tears after hearing my stupid car’s transmission needed to be re-built and it would cost us $4000.  I just felt like we can’t catch a break here.  Then I was quickly brought back to the positive when we saw all that fluttering.  We are telling the Maltz side this weekend and then The Hub’s side the following weekend.  So we’ve still got it under wraps.  We’ll make it social media public in a few more weeks.  I’m bursting though.

As we left yesterday, I totally hugged Nurse Nina and Dr. Le and said thank you a billion times.  I sort of felt strange though because we were in the open part of the office and there were other patients around.  Since I don’t know where they are in their infertility journey, I was nervous about making them feel bad.  Then I thought, well hopefully we will give them confidence in IVFmd and their staff of miracle workers.

After leaving cloud 9, it was back to reality and dealing with my car.  We purchased a used Buick Enclave in Nov 2011 and the thing was a damn lemon.  Then we learn that the transmission needs to be re-built and I think, “no biggie, that falls under power train warranty”…except it was a 5 years/100,000 miles warranty.  I thought it was just 100,000 miles and therefore our warranty went up in January. Two stink’n months ago.  With $4000 worth of repairs, we said forget it.  We were so upside down and it turned out to be just not a good investment.

So now I’m cruising around in this….
﻿

It’s really nice.  It’s a lease.  I’m worried the money piece of it was a dumb idea again but we were really in a pinch and didn’t have many options.  I’m not a person that does debt well.  I like to live within my means or even under it so this has been really hard for me.  But with two nuggets on the way, we needed something reliable and safe.  It’s much smaller than my Enclave but equally as fancy (if not nicer) with all the bells and whistles.  In three years when it’s time to trade it in, then we’ll see if we made another horrible financial decision and go from there.

Lots of changes and lots to look forward to in the future. I’m so excited.  So excite.  But also really, really nervous.  We go from no children to two at once!  I’m good with it because with the past 5 years of trying I was worried we would have only one child.  Which is hard, ask anyone who is an only child. But twins!  That’s like a built-in-best-friend! :o)