In order to not lose all of my followers (bahahahaha) to my depressing rants of infertility, I will mix it up with a book(s) review.

For any of you that are not over achievers (i.e., procrastinating starting the MBA) or kid free like me, you should have some extra time on your hands.  Or if you are a super duper over achiever and have your MBA, kids and still find time to read…..you should read the following:

This book is intense!  It’s not exactly an easy read either.  Justin Cronin is actually an English professor at Rice U in Houston, TX.  So needless to say his writing, vocabulary and style is impeccable.  In my opinion, but it is so good.  I have a habit of reading junk.  Not really junk, that’s a bad description because I cannot stand a poorly written book but I tend to lean towards romance-y, contemporary, easy reads…most of the time.  I did tackle the Stieg Larsson trilogy with vigor.  This book has so much more depth without over describing and it shocked me, several times.  The book starts with the world at a very near future (like 2013 or something) but ends quickly.  It has a vampire twist but nothing like Twilight or Sookie Stackhouse.  It’s more of a focus on super secret government weapon gone bad = end of the world as we know it.  It’s not overly sy-fi though.

I will finish by saying, I almost killed someone when I got to the end of the book. Lucky for me the sequel had just been release.  Enter: 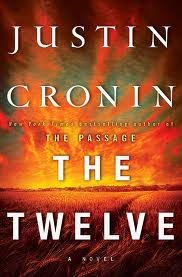 It’s a good thing for anyone in the vicinity that I was able to immediately download the second one to my Kindle.  I think I liked this one even more than the first because it intermingled so well.  I was so invested in the characters and it incorporated individuals that had very minimal parts in the first one into book two.  Again, so good.  I highly recommend these two.  The only downside is I have no idea when the last of the trilogy is set to come out.  The Twelve was actually just released in Oct this year.  I might actually go back and re-read them when I know it’s close to time for the last one to arrive.

I leave you with this:

The genius-man behind the books is hot! I might have actually stuck with English being my major if this was my prof! ;o)

Anyone have any book recommendations for me?